The Memur-Sen Confederation protested Zionist Israel's attempt to occupy the Masjid al Aqsa in 81 provinces. On the Ankara leg of the protests, Memur-Sen and NGOs marched in front of the Turkish Grand National Assembly to the Israeli Embassy and condemned the terrorist state Israel. 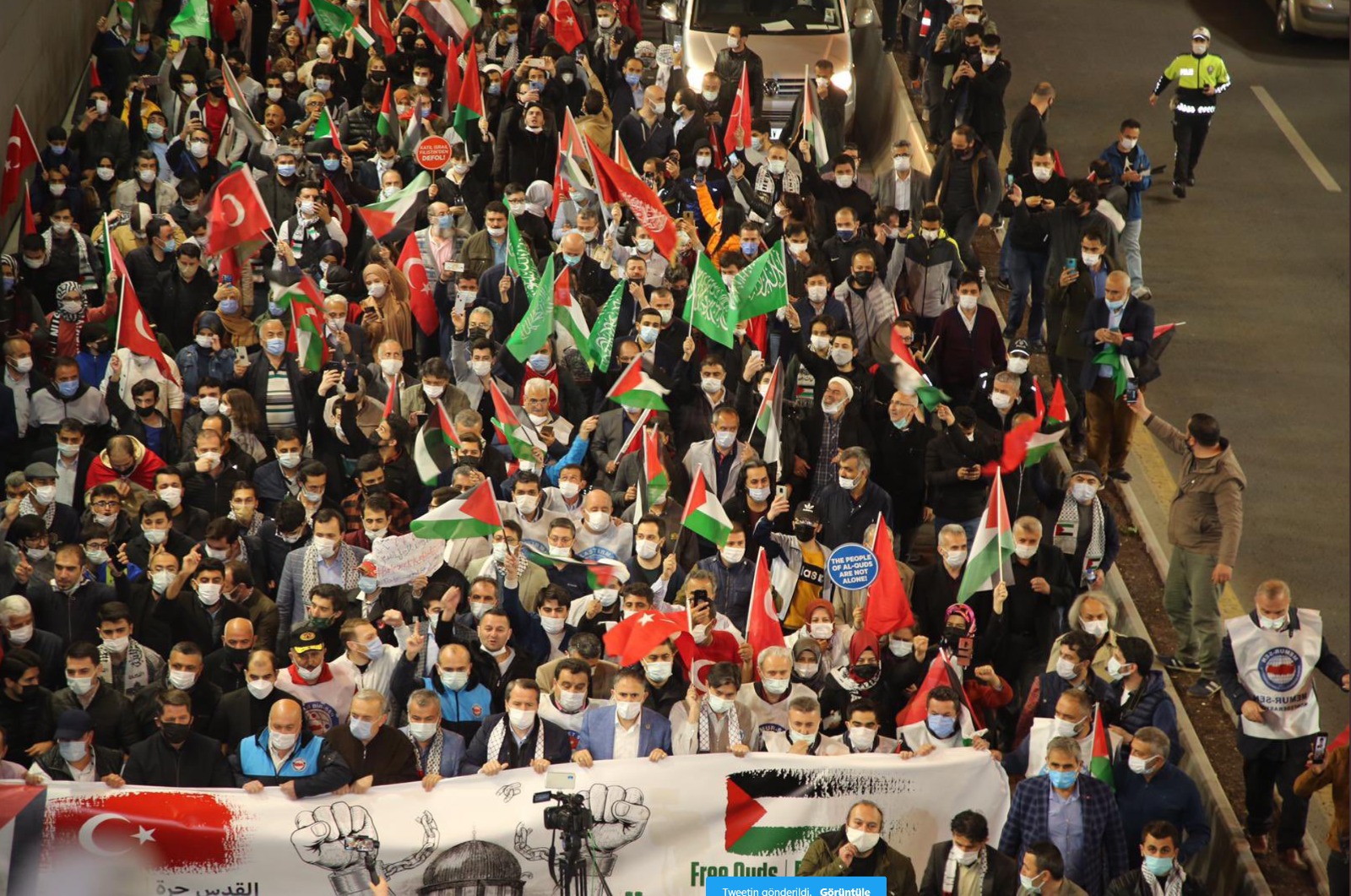 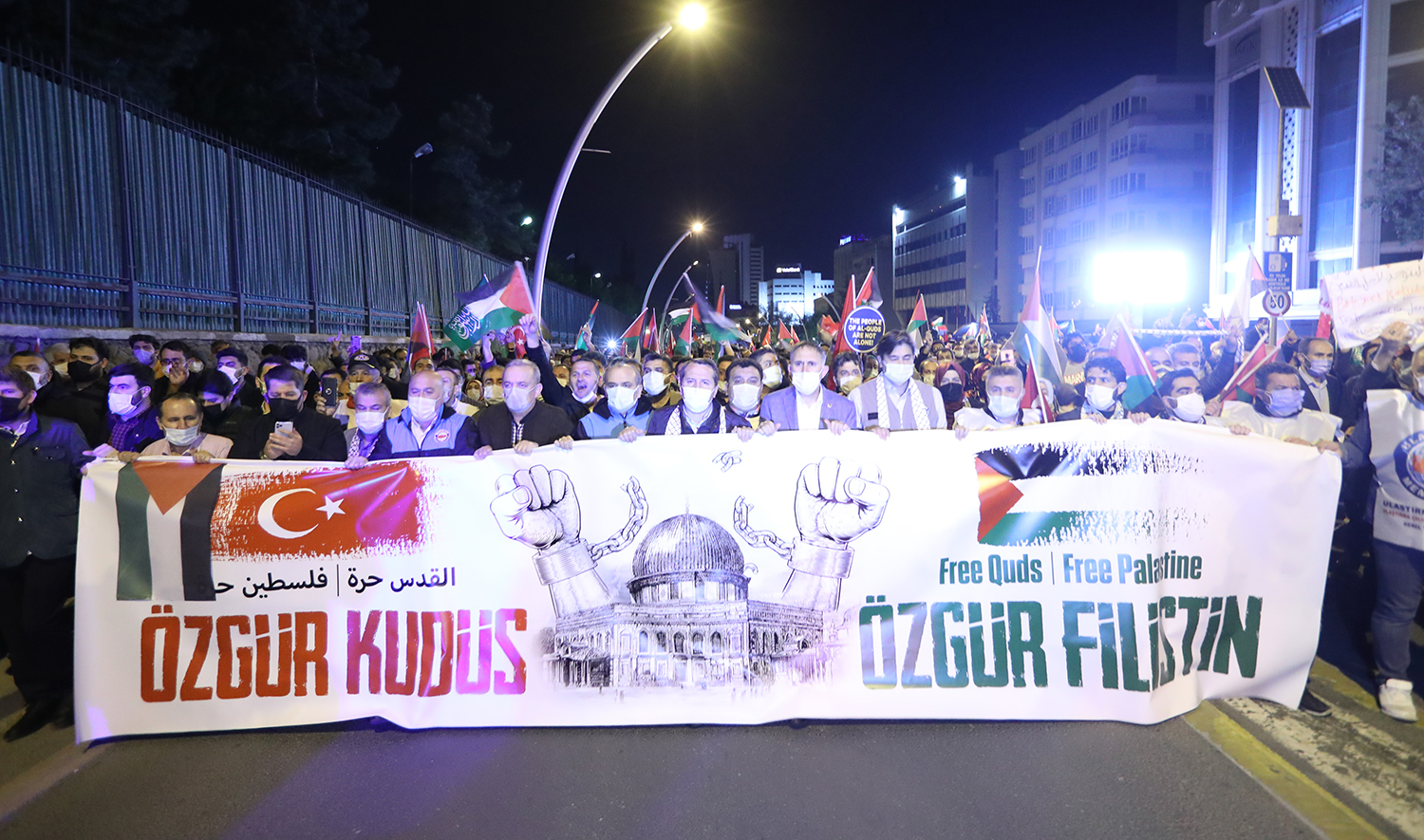 In the Ankara leg of the protests, Memur-Sen and tens of thousands of participants cursed the terrorist state Israel's attempt to invade the Masjid al-Aqsa. The march, where various slogans were chanted, continued in front of the Israeli Embassy.

Making a statement in front of the Israeli Embassy, Memur-Sen President Ali Yalçın said, "Humanity cannot be liberated until Masjid al-Aqsa is liberated." 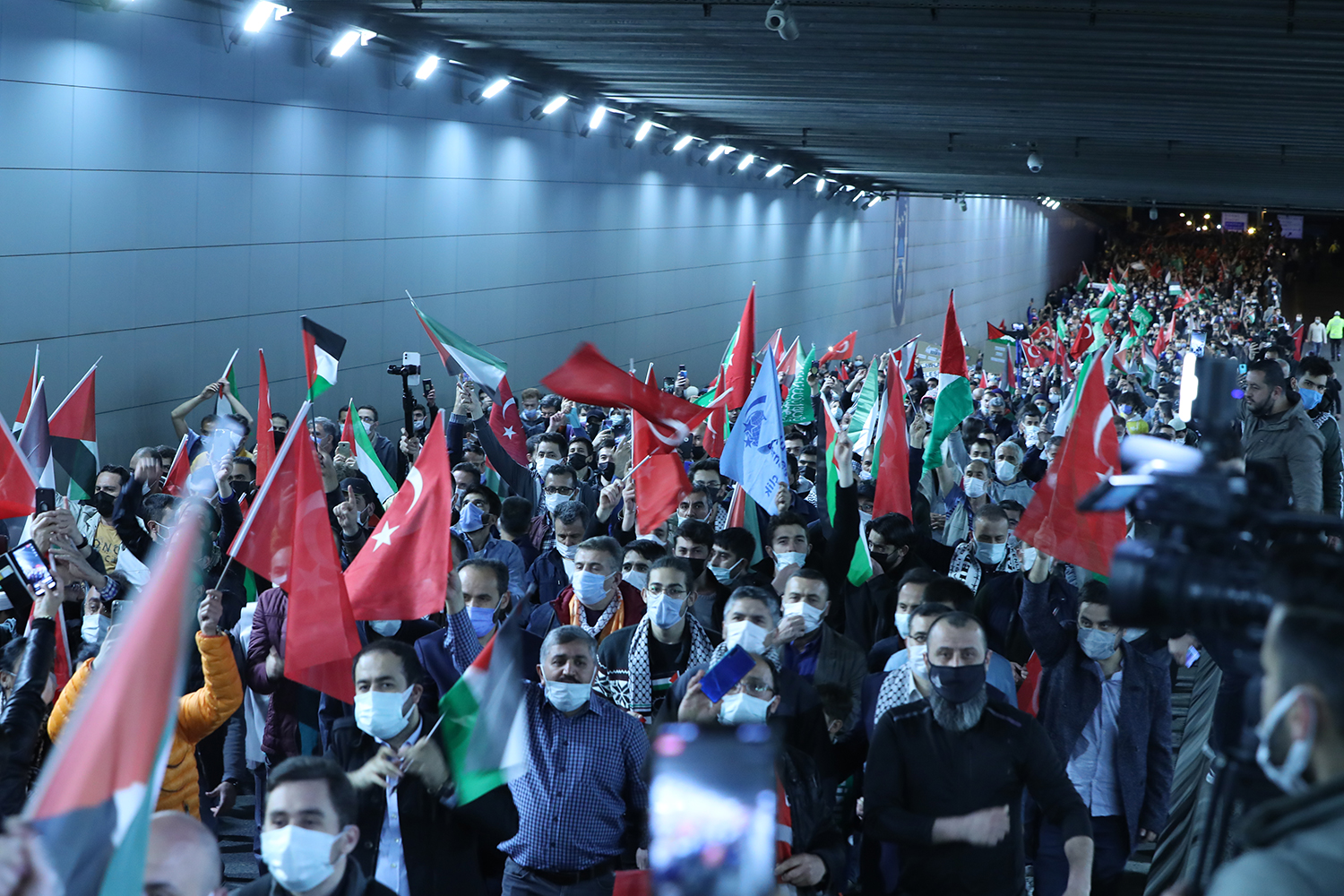 “We gathered here today to fulfill the minimum requirement of being human,” said Yalçın, “Yes. The minimum requirement for being human is to gather in this square today. It is to cry out to end Israel's brutality, occupation, cruelty and tyranny. Yes, the minimum condition of being human is to be disturbed by the Zionist boot in Masjid al-Aqsa. Declaring the terrorist character of Israel, which turned the coronavirus into a strategic apparatus, attacked the Masjid al-Aqsa, our first qibla, in this weak moment of humanity, is the minimum requirement. With the occupation of Israel, it is necessary to oppose the dirty order of the world. It is necessary to resist to put an end to the mentality of exploitation along with Israeli savagery. We know that; The US and the rulers of the system carry water to Israel’s blood mill. We know that; Both the global media network and the international establishment stage, the international law lie become a source of strength for Israel, while playing ostrich against Israel. If we are not silent. If we don't give up. If we continue to resist. If we speak together… Israel will be destroyed. Palestine will be saved. Both Zionism, occupation and oppression will end. Israel is marching towards its collapse in Masjid al-Aqsa. Israel is marching towards its disappearance in the Masjid al-Aqsa. We will see Israel's collapse and wreckage. We will spit in the faces of those who do not speak to Israel, do not speak to savagery, and call degenerate Zionism the state". 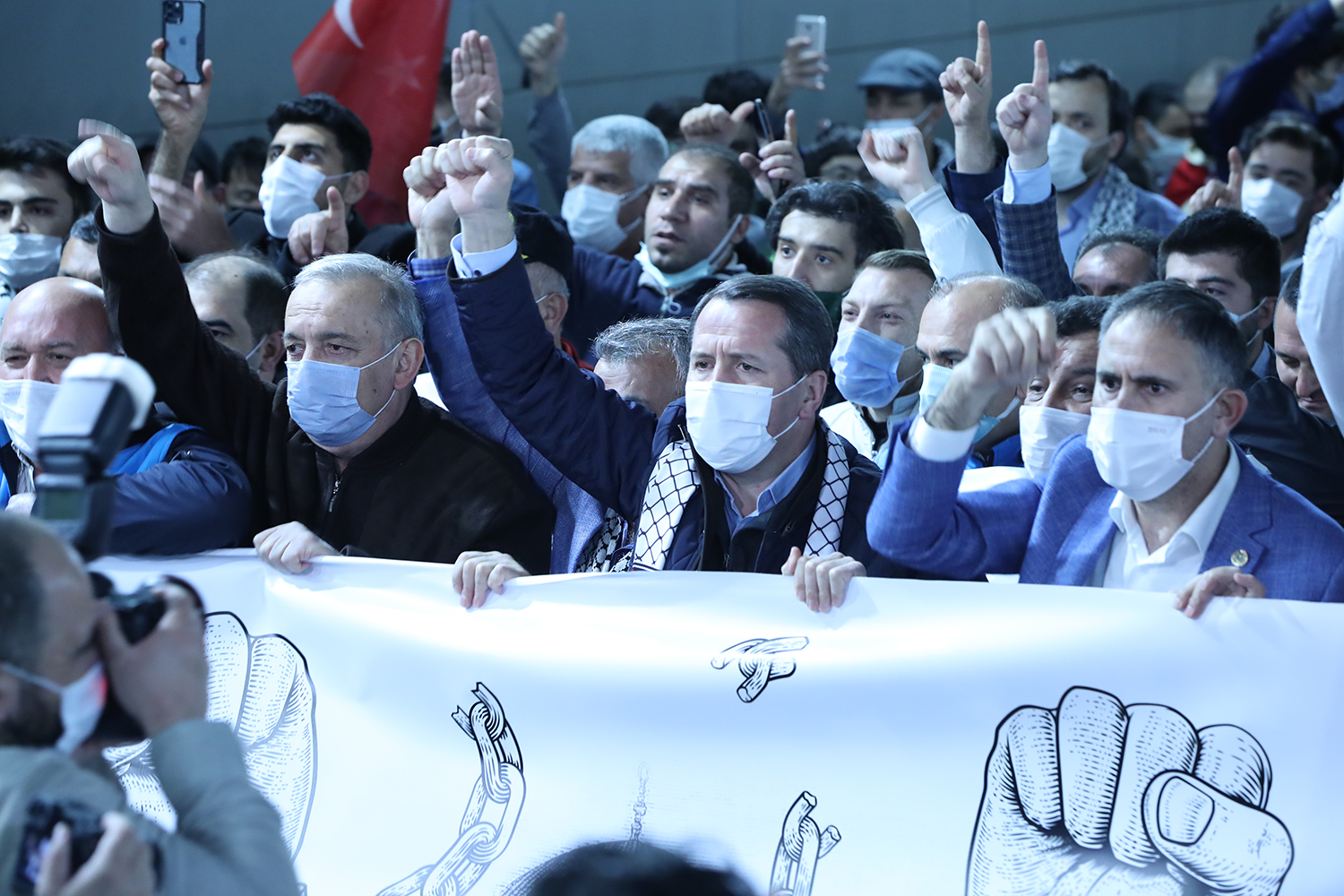 We Will Overcome the Zionist Regime's Order of Lies and Pillages

Stating that Israel was founded on lies, Yalçın said, “Israel was founded on plundering Palestine. We will overcome and end the Zionist regime's order of lies and plunder. We consider and know this as a requirement of our faith. Some may not be able to see this in the vortex of power, be afraid, silence, and haze. We will scream without fear, haze or tired. Because we have believed that the persecution will not last forever and that cruelty will not suffer. In Palestine, we will see together that the Ababils who resist the elephants of the global Ebrehe, who rely on technology, will prevail. We are on the side of those Ababils. We are against the Ebrehe. We know that; Israel has always existed in the region by producing enemies, with its eternal ghetto culture for centuries. Yes, Israel is a prisoner of its fears. And Israel has put violence at the center of its policies, as it is a prisoner of lobbies that feed on the holocaust industry. That's exactly why we say; What they did in Masjid al-Aqsa will be the end of Israel. The diplomatic brutality it has produced in al-Quds, the Zionist insanity that has spread throughout Palestine, the racist Jewish brutality against our Palestinian brothers is the end of the road for Israel. It is the beginning of the end. Many leaders of Israel, including Ben Gurion, the founder of terrorist Israel and the first leader of this terrorist organization that looks like a state, are people who have been involved in terrorism and terrorist activities. In other words, there are terrorists at the foundation, base, every floor and ceiling of Israel. There is blood, grudge and dirt in the history and definition of Zionist Israel." 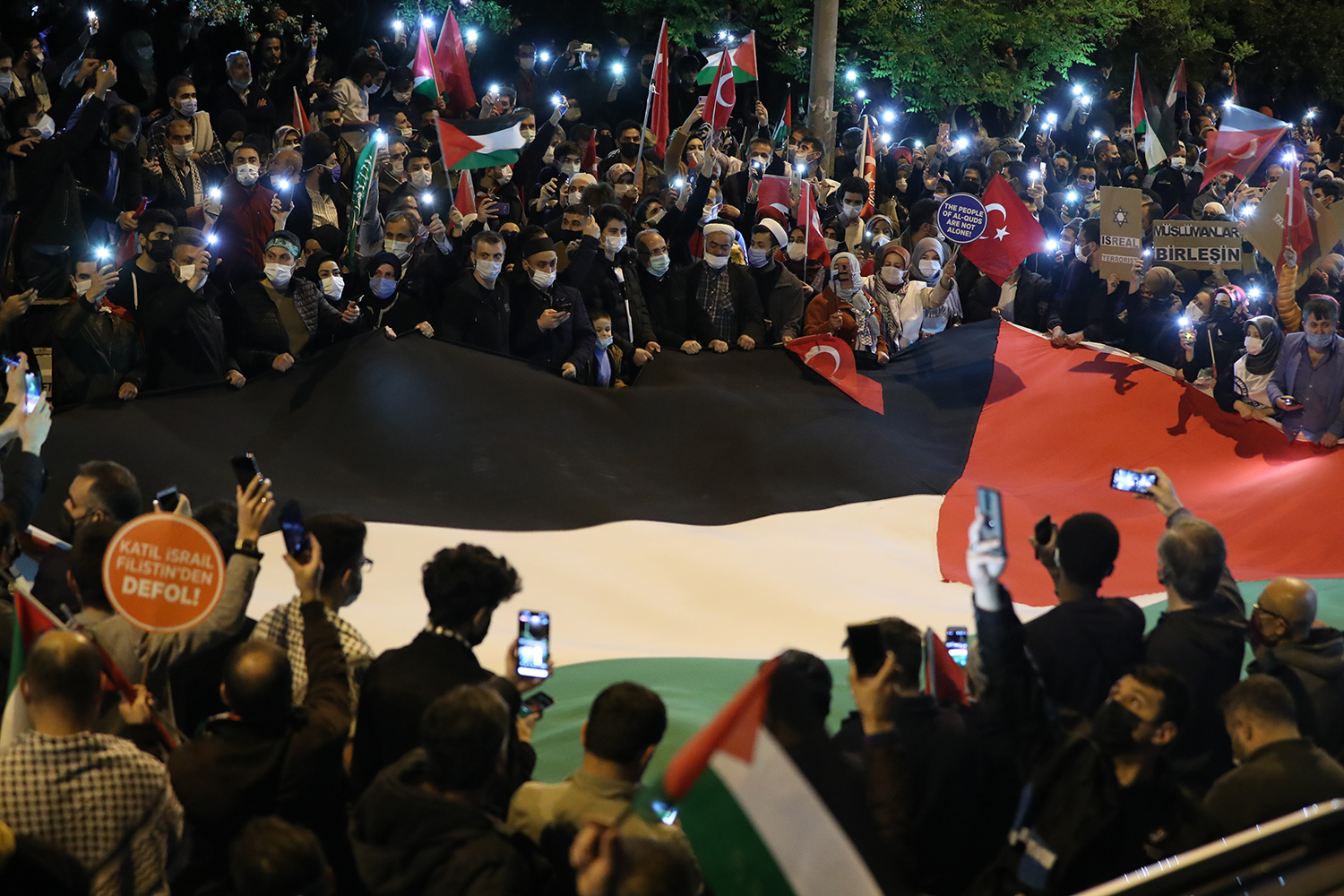 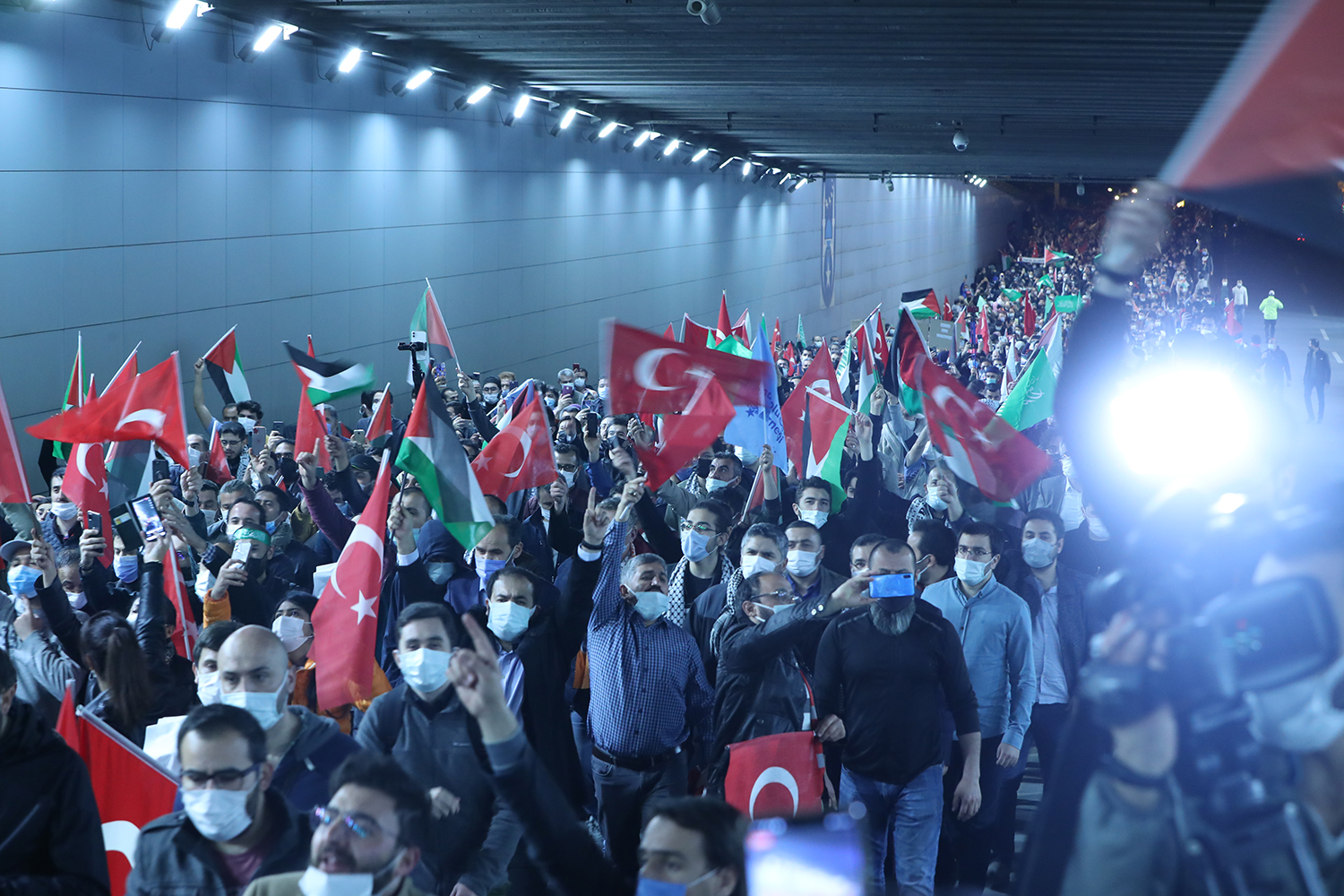 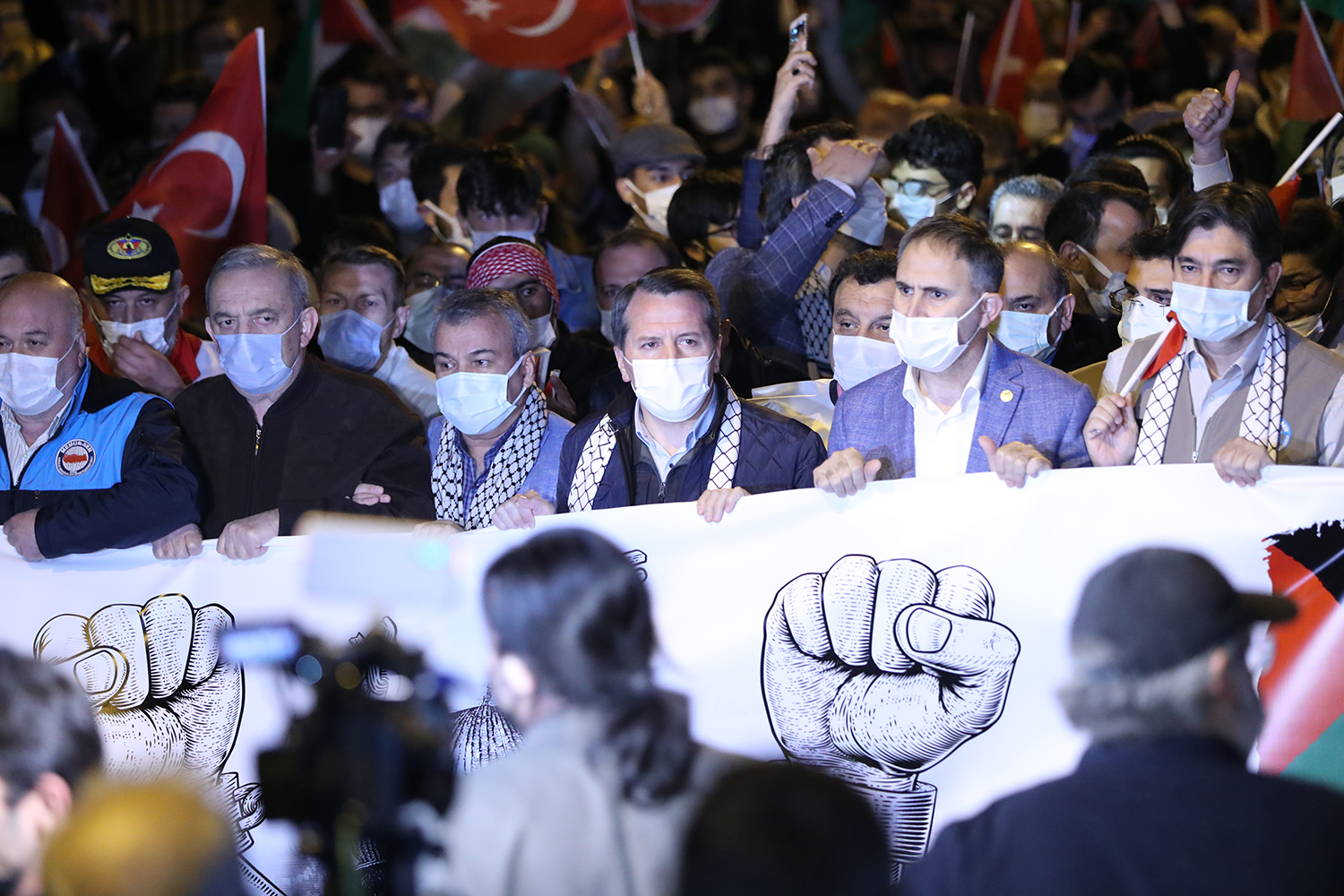 Palestine Will Be Free Very Soon From Zionist Occupation

Noting that Muslims and all the good people of the world should now join hands and say it is our turn, Yalçın continued his words as follows: “It is time to reject Israel in our minds with its blood, grudge and dirt, cruelty and terror, and expel it from the occupying geography and systems. A drop of tears falling from the eyes of the Palestinian child today is the flood of Noah for the whole of humanity. Noah's ship, which will save us all, is the struggle against Israel and the struggle for justice in Palestine, al-Quds and Masjid al-Aqsa. The way and the judgment are clear: It is an independent and free state whose name is Palestine, its capital is al-Quds, and whose spiritual basis is the Masjid al-Aqsa. We will continue this blessed struggle without paying attention to the familiar illusions of Zionism and not being pressured by the discourses that are the shelter of capitalism and imperialism. Everyone should know and hear that Masjid al-Aqsa is the temple of Islam and Muslims, the religion of peace. However, this holy shrine is the harem of all people for peace and tranquility. Everyone should know, hear and believe that; al-Quds is Palestine. al-Quds is an Islamic city. Al-Quds is the civilization accumulation of all beliefs. And everyone will see that; Palestine will live free and independent. Palestine will soon be free from Zionist occupation, Palestinians from Zionist brutality very soon. The embrace, which was inserted in the rows of our founder, Mehmet Akif İnan, the Zionist footprints will be cleared in Aqsa, humanity and Muslims and the states that listen to them will initiate both global and diplomatic revolt. We are for it. Justice in al-Quds means justice all over the world. Because the enemy of justice is Zionism and feeds on the imperialism. We cannot talk about freedom in the world until Masjid al-Aqsa is liberated. As long as it does not leave the Masjid al-Aqsa, al-Quds, Palestine completely, Israel is terrorist, brutal and murderous. And the last word is that everyone should know and make history; Israel deserved to be destroyed and disappear with its dirty and bloody move against Al-Aqsa Mosque. Israel will be destroyed and Palestine will be saved. Long live Palestine, Long live al-Quds, Long live Masjid al Aqsa soul, al-Quds is our honour, Palestine struggle is our pride." 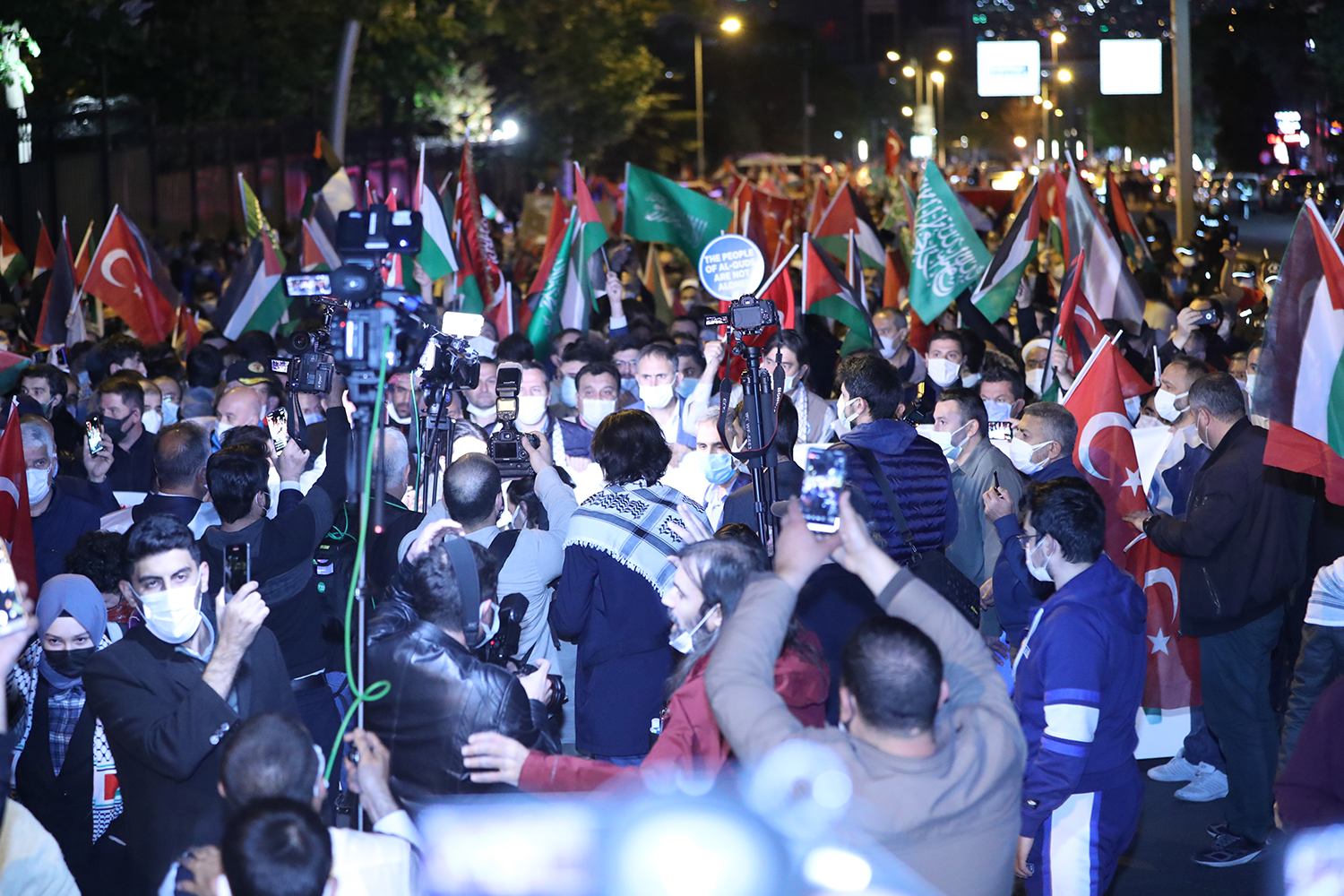 Yalçın called the whole world as Memur-Sen at the end of his speech. Yalçın listed the following items:

• All international organizations to Israel; Should say either you leave Aqsa or you are removed from membership.

• The Organization of Islamic Cooperation and the whole of its member countries should end all diplomatic, political, commercial business and transactions with Israel without exception. The Organization membership of countries that do not comply with this decision should be terminated.

• Both the United Nations General Assembly and the Security Council should condemn Israel's attitude and, in case of its repetition, should apply it by taking a decision of international strict and sharp sanctions.

• Turkey should fulfill the needs of the Palestinian people's trust in itself and end all relations and communications with Israel until it finishes its attitude in the Masjid al-Aqsa.

• Turkey's companies, holdings, non-governmental organizations should end all commercial, political and cultural relations with Israel or its pro-Israeli structures.

• Israel should give back the land it stole from Palestine, leave al-Aqsa entirely, end settlement-looking occupation efforts, pay compensation for the loss of life and property of our Palestinian brothers, and leave the region as soon as possible.

• Should be aware that Israel is using the Masjid al-Aqsa attacks as a curtain covering the Palestinian occupation.