International Conference on “Future of Work: Challenges and Opportunities”

International Conference on "The Future of Work: Challenges and Opportunities" organized by the Memur-Sen Confederation as part of the ILO Centenary Initiative on the Future of Work was held on 18 and April 19, 2019 in Ankara. International Conference brought together the participation of 13 regional organizations and more than 280 trade union leaders from 164 trade union representatives from 107 countries. To do this, Mr Yalçin called for strengthening cooperation and coordination within the trade union movement, taking into account the particularities of each actor, the skills and know-how of each component. "Strengthening the work of the labour movement will better serve the interests of workers and vulnerable people. " he said. The conference sessions were organized around two thematic axes: The first session began with the theme: "Building and Featuring the Capacity of People for a Better Future: But How? ".The session, moderated by Mr. Numan Özcan, Director of the ILO Turkey Office, was attended by the following panellists: Mr. Hacı Bayram Tonbul, Mr. Akansel Koç, Ms. Nurcan Önder, Mr. Selvedin Satorovic and Ms. Daiva Pakuliene.

The second session began with the theme: "Role of Institutions of Work for Decent and Sustainable Work: Facts and Conceptions. The session was moderated by Ms. Fadila Kedjour, Member of the Board of Directors of the General Union of Workers of Algeria, and was attended by the following panellists: Mr. Mehmet Zeki Güvercin, Mr. Cafer Uzunkaya, Ms. Carolyn Chepkoech Rutto (COTU-k), Ms. Alejandra Tamara Munoz Valenzuela (CUT-Chile) and Mr. Luiz Gustavo (UGT-Brazil).

The international conference looked at the challenges and opportunities in a globalized world, while identifying the challenges of the current system. Speakers also called on governments and employers' organizations to take advantage of the ecological and digital transition and to shape these two trends into a common global vision of a decent, sustainable and inclusive world of work for all, with objective the common good.

The International Conference on "The Future of Work: Challenges and Opportunities" concluded with the adoption of the Final Declaration and the signing of bilateral cooperation agreements with 49 trade union movements and 5 regional organizations.

The conference ended with a gift exchange ceremony and the traditional group photo. 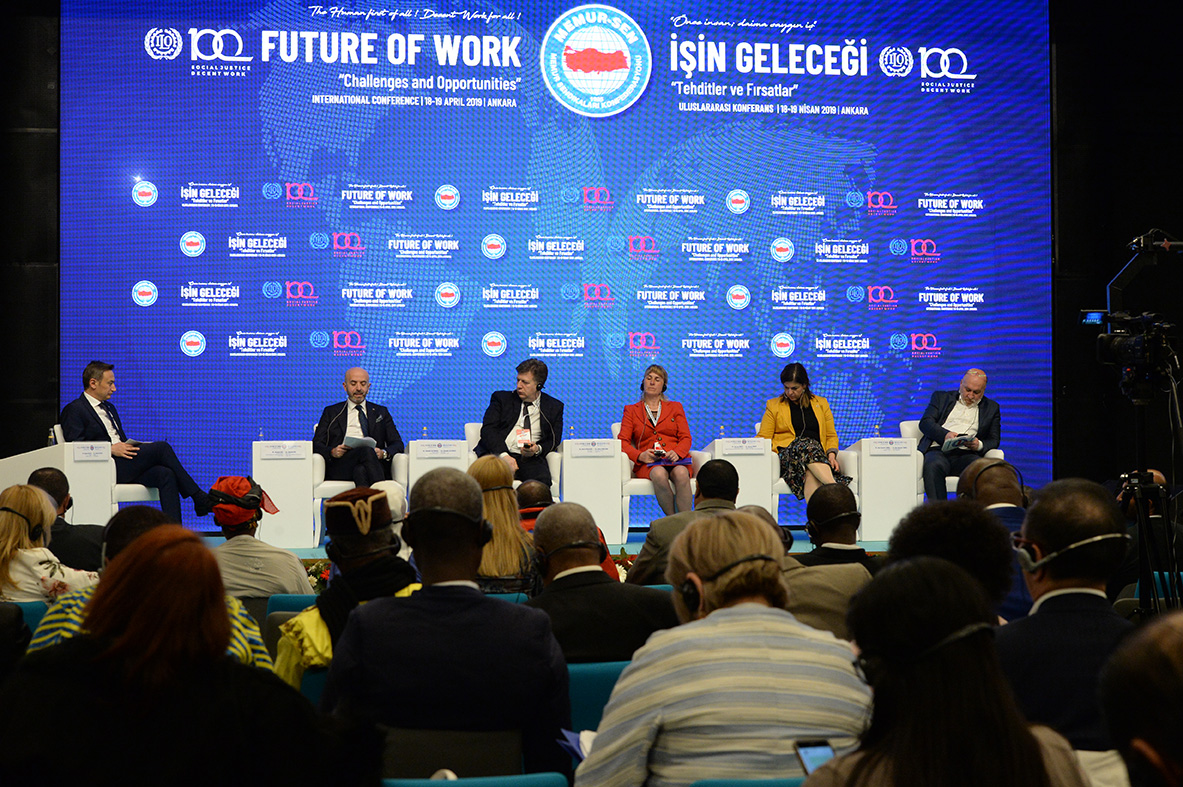